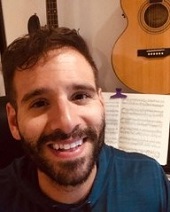 Danté Caroselli is a musician and entertainer from New York City.

With both parents being musicians, Danté began playing the drums when he was five years old and first picked up a guitar when he was eleven.

After becoming enveloped in his high school’s music theory classes and playing in several ensembles, he decided to attend the Anderson Center for the Arts at Hartwick College to pursue music further. He received his BA in Music Composition & Performance and has composed for string orchestra, choir, wind band and jazz ensemble.

Following his graduation, he moved to Boston where he taught private guitar/bass/ukulele lessons. During his time there he also did solo acoustic performances and performed as the lead singer of the local metal band Gas Attack. Upon moving to New York City, Danté continues teaching lessons in guitar, voice, composition and piano. He now plays lead guitar in the Grove Gangsters (No Doubt tribute band), plays with the Silver Arrow wedding ensemble, performs with the band Zombie Sundae and sings for his own band, Brociopath. Recently he has composed the music for the animated series “The U.S.S. New York.”

See what else we offer: